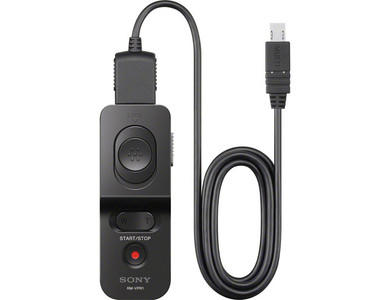 The RM-VPR1 Remote Control with Multi-terminal Cable for Select Sony Cameras from Sony is a wired remote commander that allows various remote control operations to be performed without handling the camera, therefore eliminating camera shake and providing self-portrait and other control applications. When using the RM-VPR1 with most Sony cameras, you are able to control shutter, optical zoom, digital zoom and bulb function. You are also able to control video recording. The remote is also functional with the Alpha a99, a77, a65, a57 and a37 cameras but only for photo (not video) functions. Both a multi-terminal cable and remote terminal cable are included for comprehensive compatibility.

The longer you rent,
the lower the daily price.
Get Details »

Accidents happen, and when it comes to camera gear, those accidents can be very expensive!

With Drop Protection, rent all the gear you need for your next shoot with confidence, knowing that if anything gets dropped and damaged, your wallet won't take a major hit on repair costs.

Pricing starts at $XX per order and covers XX% of repair costs for covered gear.

Some Restrictions Apply. Speak to a Hawaii Camera agent for details.

The Longer You Rent, The More You Save

We're here to help you achieve your shooting goals, and that includes making the most of your budget. The longer you rent gear from us, the more you save on your daily rental rate.

To see how much you can save, try adding more days to your rental time frame.

This product is not available to rent.

Please contact us at support@hawaiicamera.com for more information regarding this product.